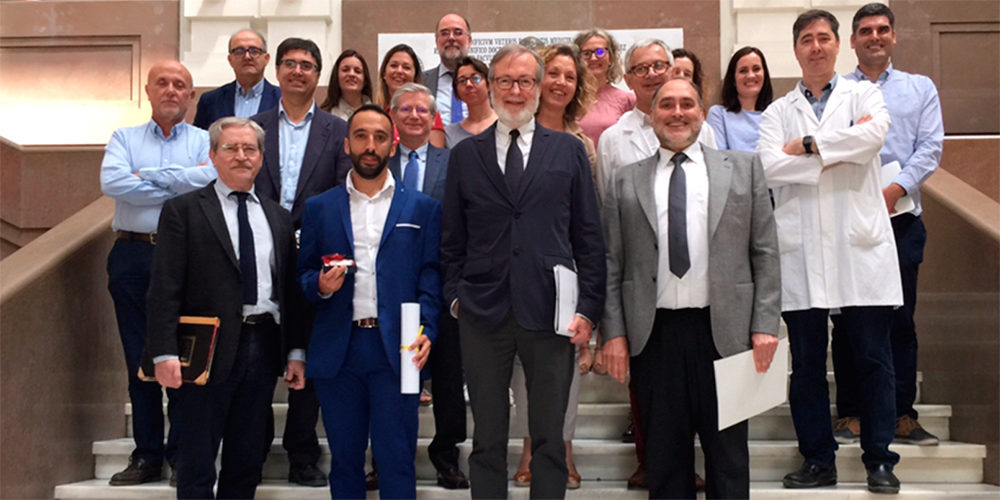 The associate professor of the Faculty of Medicine and Odontology of the University of Valencia and researcher of the Peset Hospital and Fisabio Jesús Cosín has won the 39 Award-Medal García Blanco for young researchers awarded by the University of Valencia. The award recognises the study of a possible therapeutic target against Crohn’s disease through the Cosín research group, a pioneer in this area.

Jesús Cosín is an associate professor at the Faculty of Medicine and Odontology of the University of Valencia and a researcher at the Doctor Peset University Hospital and the Foundation for the Promotion of Health and Biomedical Research of the Valencian Region (FISABIO). He has received the García Blanco Medal Award in recognition of his scientific career in the field of experimental medicine.

The award, from the Faculty of Medicine of the University of Valencia and the Prince Felipe Research Centre (CIPF), is awarded in recognition of the scientific work of young researchers and researchers of less than 30 years in the areas of science and biomedicine. It is granted in honour of the eminent doctor and researcher José María García Blanco (1898-1973), who discovered the extrapancreatic synthesis of insulin and was a pioneer in the development and implementation of the analysis of hypothyroidism in newborns, a common cause of intellectual disability.

This edition of the award recognises the work of Jesús Cosín in the study of a possible therapeutic target against Crohn’s disease and the complications associated with this pathology. Specifically, it focuses on analysing the relevance of a molecule, called succinate, and its receptor, SUCNR1, in inflammation and intestinal fibrosis.

“We have seen that both this receptor and the compound that activates it are increased in patients with Crohn, so that a possible drug that blocks this receptor could help reduce inflammation and even fibrosis”, highlights Jesús Cosín. The effect of this receptor has already been described in other diseases, such as diabetes or cancer, but its influence is now being discovered in other inflammatory and autoimmune pathologies such as Crohn’s disease.

In this line, the Translational Research Group in Intestinal Inflammatory Disease led by Jesús Cosín and assigned to the Mixed Unit of the Doctor Peset University Hospital and the Faculty of Medicine of the University of Valencia is a pioneer in the field. “The results are promising. This is a new line of research that has already given us good results in experiments in mice”, adds the researcher.

The research team has studied two groups of mice; one of them, lacking the SUCNR1 receptor, and the other, with the same active receptor to which acute colitis was induced. The results of the experiment showed that the mice that had the receptor lost 10% of their weight, and those lacking it, only 3%, since they had less episodes of diarrhoea and bleeding in stool.

Likewise, the same experiment was carried out in mice, intestinal fibrosis was induced and it was studied how it affected collagen, which is the main marker of fibrosis. In the model mouse with fibrosis and active receptor, there was an increase in collagen expression in a proportion of up to 60 times higher, while in mice lacking the receptor the increase was only 10 times higher.

The research team also conducted experiments with blood samples and intestinal resections of 40 patients with Crohn’s Disease from the Hospitals of Sagunto and Manises. The study showed that the receptor (SUCNR1) is expressed three times more in a patient with Crohn’s disease than in a healthy patient.

The molecule that activates it (succinate) is also increased both in the intestine of Crohn’s patients and in blood, which leads to target the research team that could also be used as a biomarker in blood tests to detect the worsening or not of patients with Crohn’s disease.

“Our goal is to improve the quality of life of patients who live with this disease and, therefore, we are already in contact with a pharmaceutical company to develop antagonists that block this receptor”, highlights Jesús Cosín.

View all posts by admin →